How to Book a Mini-Trip Within a Large Trip

Sometimes layovers are the WORST! You have those days when you’re just so ready to get to your final destination or maybe you’re ready to get home and can’t imagine making that stop along the way. I’ve BEEN THERE! If a layover is inevitable, why not make the most of it? Let me show you how it’s done.

I always pay attention to what routes certain airlines take and which airports they tend to connect through. Once you get the hang of it, you can actually begin to create multiple trips within one.

For example, I needed to go to China and I noticed Swiss Air required me to take a layover in Zurich, a city I had never visited before. There was no way to fly directly from JFK to Beijing on Swiss Air. Although I could fly to China in less time in the other direction around the world, I had never flown Swiss Air before and I was determined to try it out. This trip also happened to be over a long holiday weekend in the US. Instead of flying out just in time to get to China the day I needed to be there, I decided to leave four days early which would allow me to take advantage of the long weekend.

Let’s say I needed to be in Beijing the Tuesday after Labor Day this year which is September 3rd. Instead of choosing the below flight:

I would search for a multi-city flight instead of a regular one-way or roundtrip.

I could choose this flight and fly out Friday night after work. Depending on how late I work on a Friday, I could either take the 6:10 pm flight or the 9:00 pm flight which would require NO vacation days!

If you’re like me, you probably like to take the Friday off work before long “Monday-off holiday weekends.” If that’s your thing, use one vacation day on Friday and enjoy a full three day weekend in Zurich by flying out Thursday night instead of Friday.

The amazing thing is: when I booked this flight last year, the price difference was negligible. I also recently booked a multi-city flight in lieu of a one way on Qatar Air from Cape Town >> Doha >> JFK. The multi-city gives me two days to spend in Doha AND the multi-city was $18 CHEAPER than the one way with the layover at the time of booking. I booked my hotel with points, therefore I’m essentially getting a free weekend in Doha! This also helps break up the otherwise extremely long haul from Cape Town to JFK with only a two-hour break in Doha.

Every multi-city stopover may not be of equal or lesser price, however, it’s worth checking out the options when you have the extra days to spare. There will always be more to see in a place. A two – three-day stopover will likely only scratch the surface of a destination. However, it may be the mini-getaway you need for a fraction of the cost! IcelandAir and TAP Portugal offer inexpensive stopover options, just to name a few. If you have the extra time and you’re able to book a cheap place to stay, I say go for it!

Don’t have a full weekend? No problem! Many cities (especially in Scandinavia) offer 6 hour+ layovers. I once had a layover in Oslo, Norway that enabled me to do some sightseeing in the city center and eat a nice (NON-AIRPORT) meal before returning to OSL to catch my flight home. Oslo, Stockholm, and Copenhagen are excellent cities for long layovers. They all have trains that run directly from the airport to the city center in ~20 minutes or less. The Oslo train, for example, runs every ten minutes so it’s extremely easy to plan. 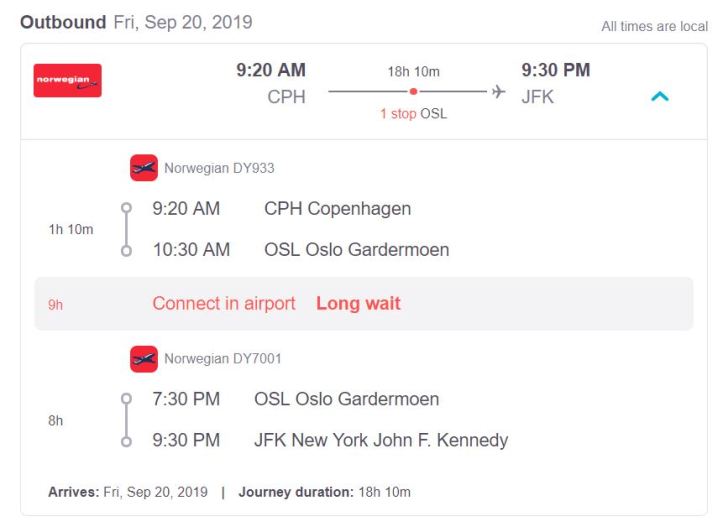 *All above screenshots are example searches pulled from skyscanner.com*

Have you ever explored during a long layover or enjoyed a stopover? What was your experience? Would you do it again?